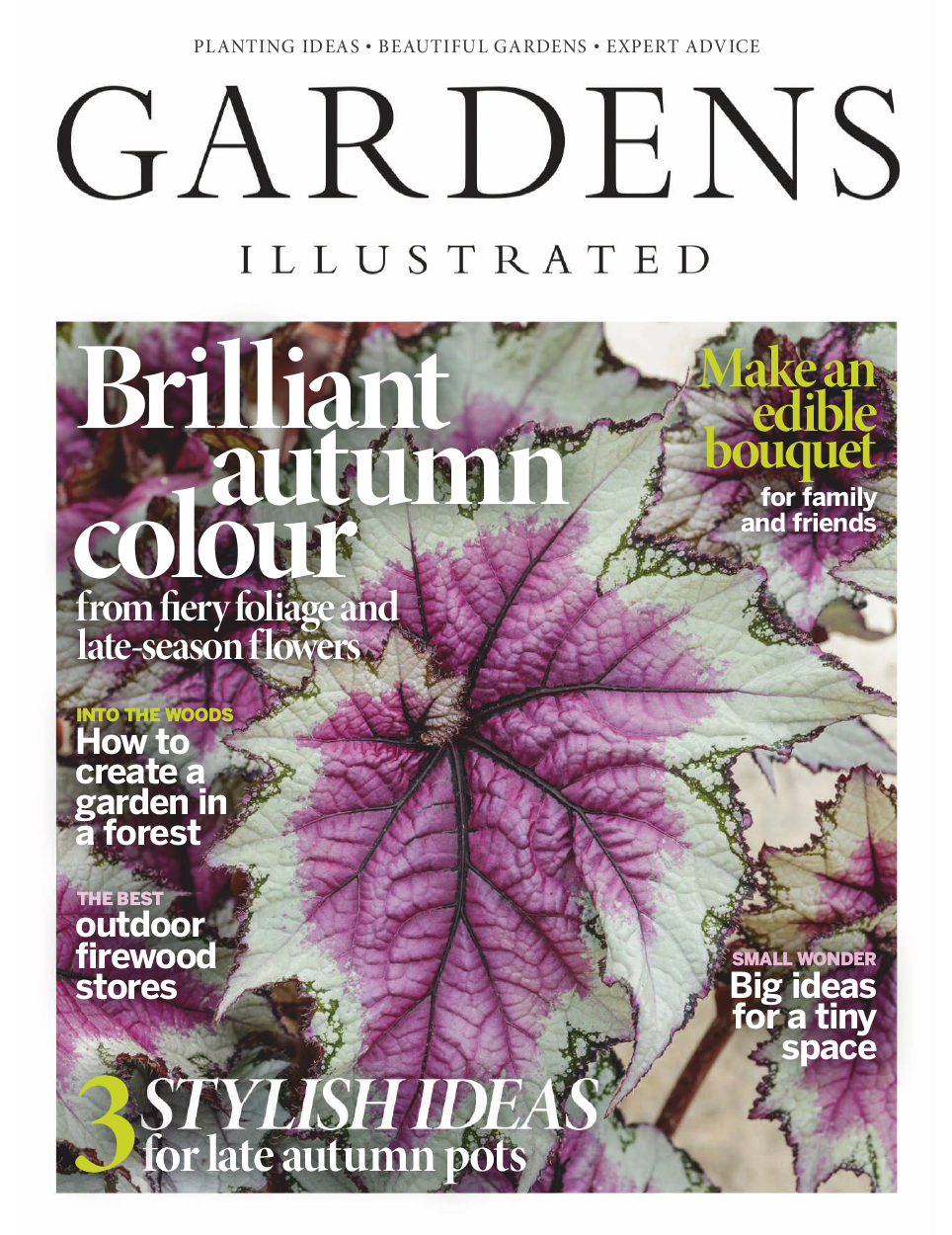 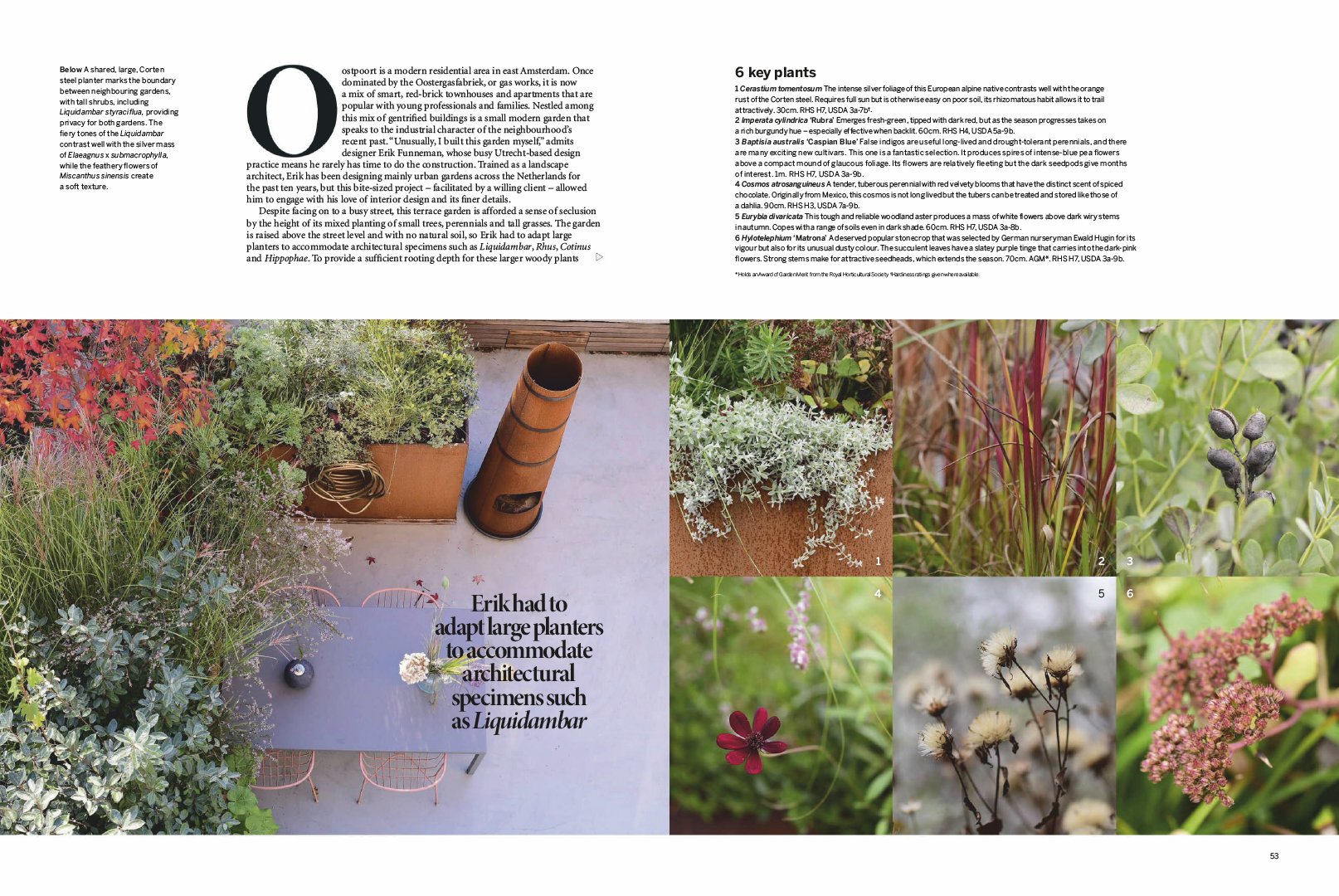 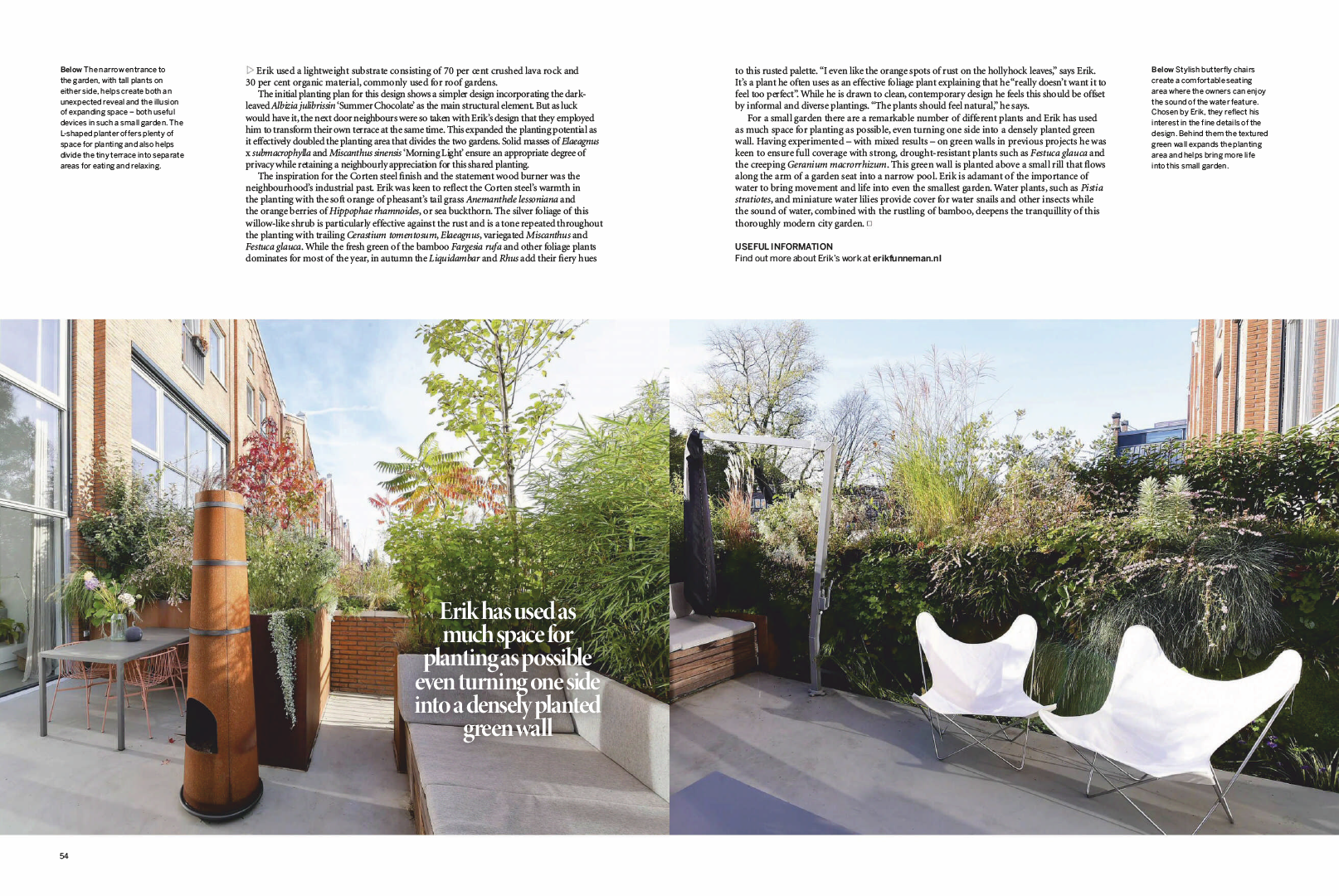 Faced with the challenge of creating a city garden that would offer both privacy and
separate spaces for seating and eating, designer Erik Funneman has used deep Corten steel

Below left The rusted finish of Corten steel clads the main planting area and is repeated in
the portable wood burner. Below The silvery foliage of Baptisia and Artemisia top the green wall, with Soleirolia soleirolii flowing down to the rill and connected pool. A dense hedge of Fargesia rufa provides privacy and helps to reduce noise from the street below.

Below A shared, large, Corten steel planter marks the boundary between neighbouring gardens, with tall shrubs, including Liquidambar styraciflua, providing privacy for both gardens. The fiery tones of the Liquidambar contrast well with the silver mass of Elaeagnus x submacrophylla, while the feathery flowers of Miscanthus sinensis create
a soft texture.

Oostpoort is a modern residential area in east Amsterdam. Once dominated by the Oostergasfabriek, or gas works, it is now a mix of smart, red-brick townhouses and apartments that are popular with young professionals and families. Nestled among
this mix of gentrified buildings is a small modern garden that speaks to the industrial character of the neighbourhood’s recent past. “Unusually, I built this garden myself,” admits designer Erik Funneman, whose busy Utrecht-based design practice means he rarely has time to do the construction. Trained as a landscape architect, Erik has been designing mainly urban gardens across the Netherlands for the past ten years, but this bite-sized project – facilitated by a willing client – allowed him to engage with his love of interior design and its finer details. Despite facing on to a busy street, this terrace garden is afforded a sense of seclusion by the height of its mixed planting of small trees, perennials and tall grasses. The garden is raised above the street level and with no natural soil, so Erik had to adapt large planters to accommodate architectural specimens such as Liquidambar, Rhus, Cotinus and Hippophae. To provide a sufficient rooting depth for these larger woody plants.

Erik had to adapt large planters to accommodate. architectural specimens such as Liquidambar

Below The narrow entrance to the garden, with tall plants on either side, helps create both an unexpected reveal and the illusion of expanding space – both useful devices in such a small garden. The L-shaped planter offers plenty of space for planting and also helps divide the tiny terrace into separate areas for eating and relaxing. Erik used a lightweight substrate consisting of 70 per cent crushed lava rock and 30 per cent organic material, commonly used for roof gardens. The initial planting plan for this design shows a simpler design incorporating the darkleaved Albizia julibrissin ‘Summer Chocolate’ as the main structural element. But as luck would have it, the next door neighbours were so taken with Erik’s design that they employed him to transform their own terrace at the same time. This expanded the planting potential as it effectively doubled the planting area that divides the two gardens. Solid masses of Elaeagnus x submacrophylla and Miscanthus sinensis ‘Morning Light’ ensure an appropriate degree of privacy while retaining a neighbourly appreciation for this shared planting. The inspiration for the Corten steel finish and the statement wood burner was the neighbourhood’s industrial past. Erik was keen to reflect the Corten steel’s warmth in the planting with the soft orange of pheasant’s tail grass Anemanthele lessoniana and the orange berries of Hippophae rhamnoides, or sea buckthorn. The silver foliage of this willow-like shrub is particularly effective against the rust and is a tone repeated throughout the planting with trailing Cerastium tomentosum, Elaeagnus, variegated Miscanthus and Festuca glauca. While the fresh green of the bamboo Fargesia rufa and other foliage plants dominates for most of the year, in autumn the Liquidambar and Rhus add their fiery hues

to this rusted palette. “I even like the orange spots of rust on the hollyhock leaves,” says Erik. It’s a plant he often uses as an effective foliage plant explaining that he “really doesn’t want it to feel too perfect”. While he is drawn to clean, contemporary design he feels this should be offset by informal and diverse plantings. “The plants should feel natural,” he says. For a small garden there are a remarkable number of different plants and Erik has used as much space for planting as possible, even turning one side into a densely planted green wall. Having experimented – with mixed results – on green walls in previous projects he was keen to ensure full coverage with strong, drought-resistant plants such as Festuca glauca and the creeping Geranium macrorrhizum. This green wall is planted above a small rill that flows along the arm of a garden seat into a narrow pool. Erik is adamant of the importance of water to bring movement and life into even the smallest garden. Water plants, such as Pistia stratiotes, and miniature water lilies provide cover for water snails and other insects while the sound of water, combined with the rustling of bamboo, deepens the tranquillity of this thoroughly modern city garden. 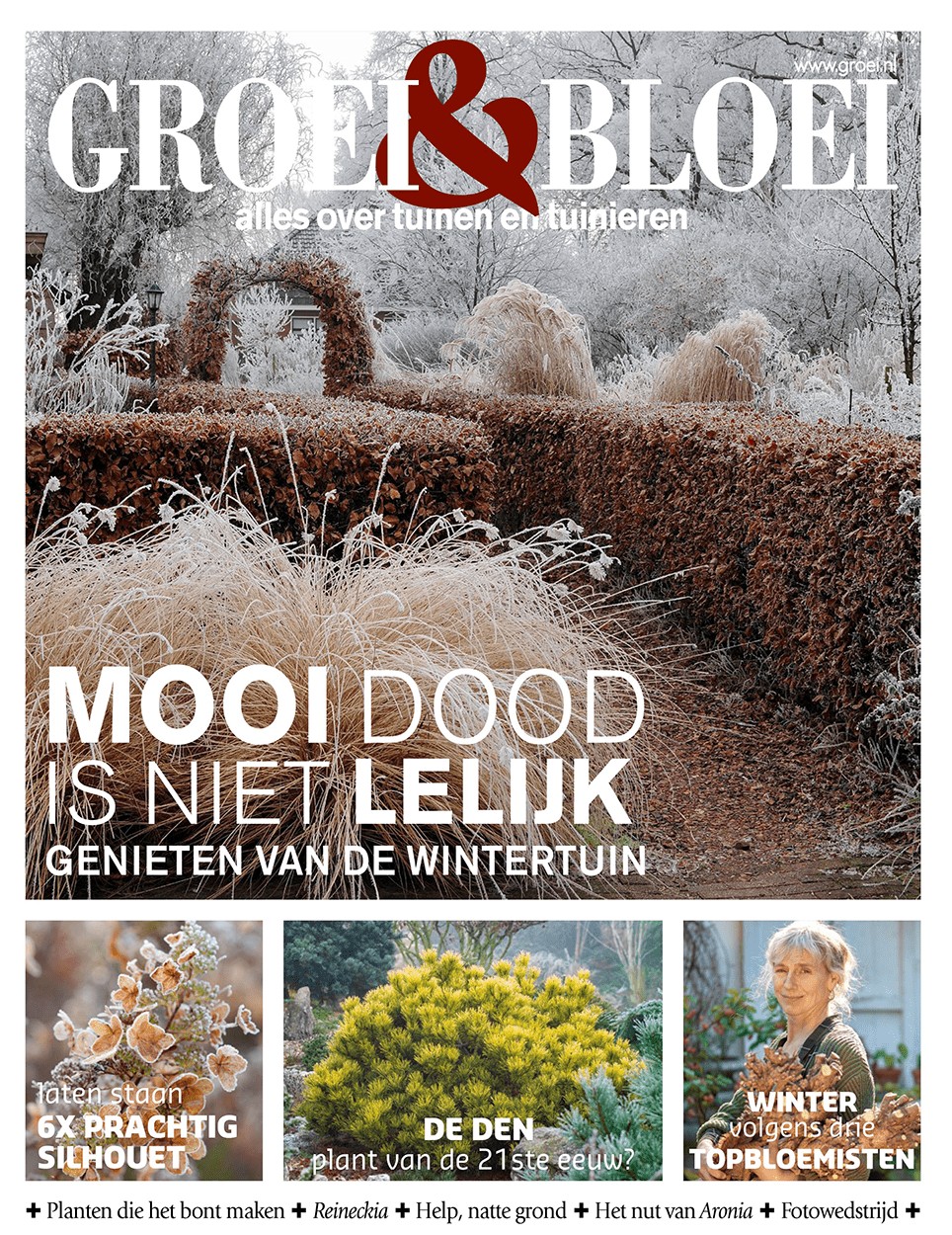 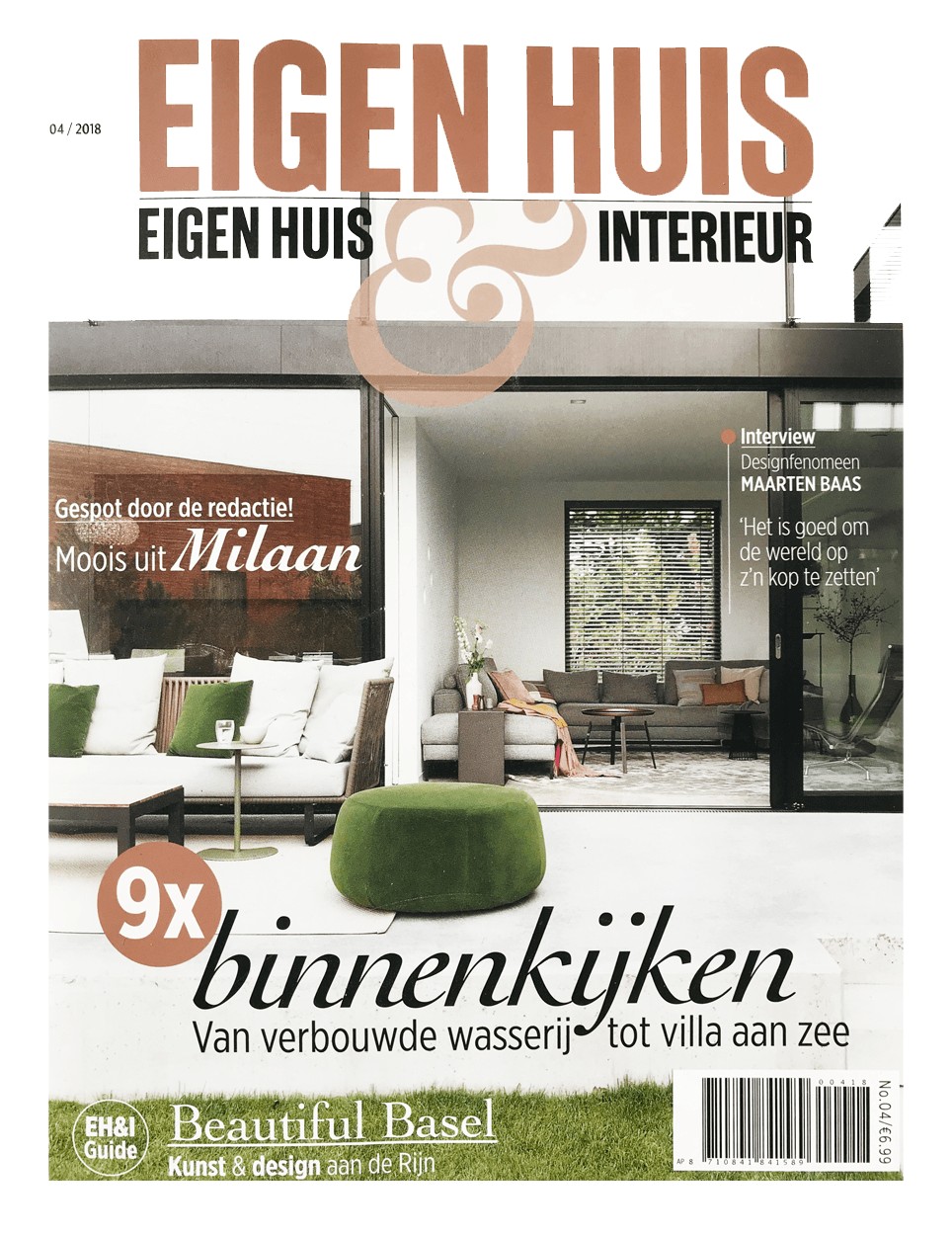 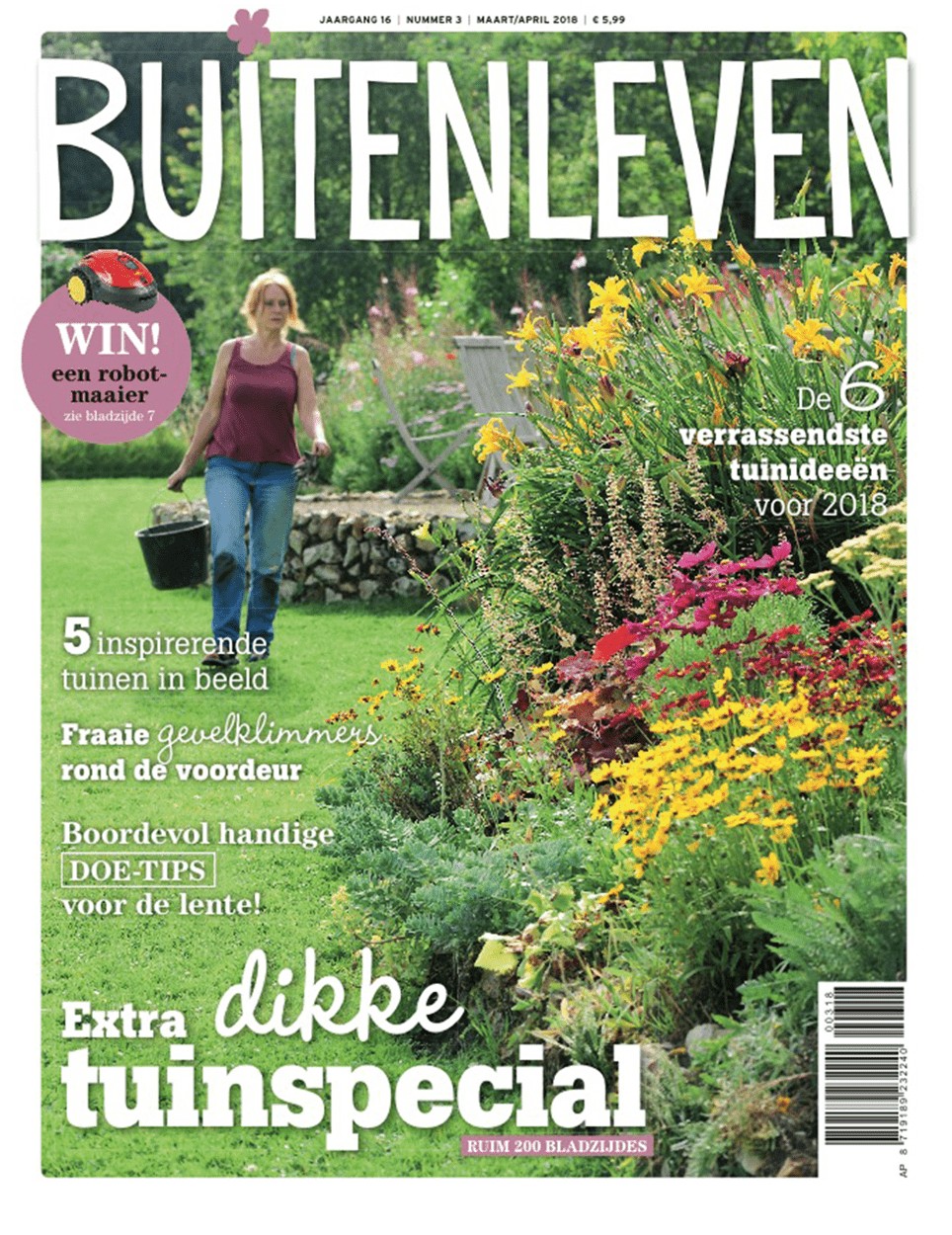 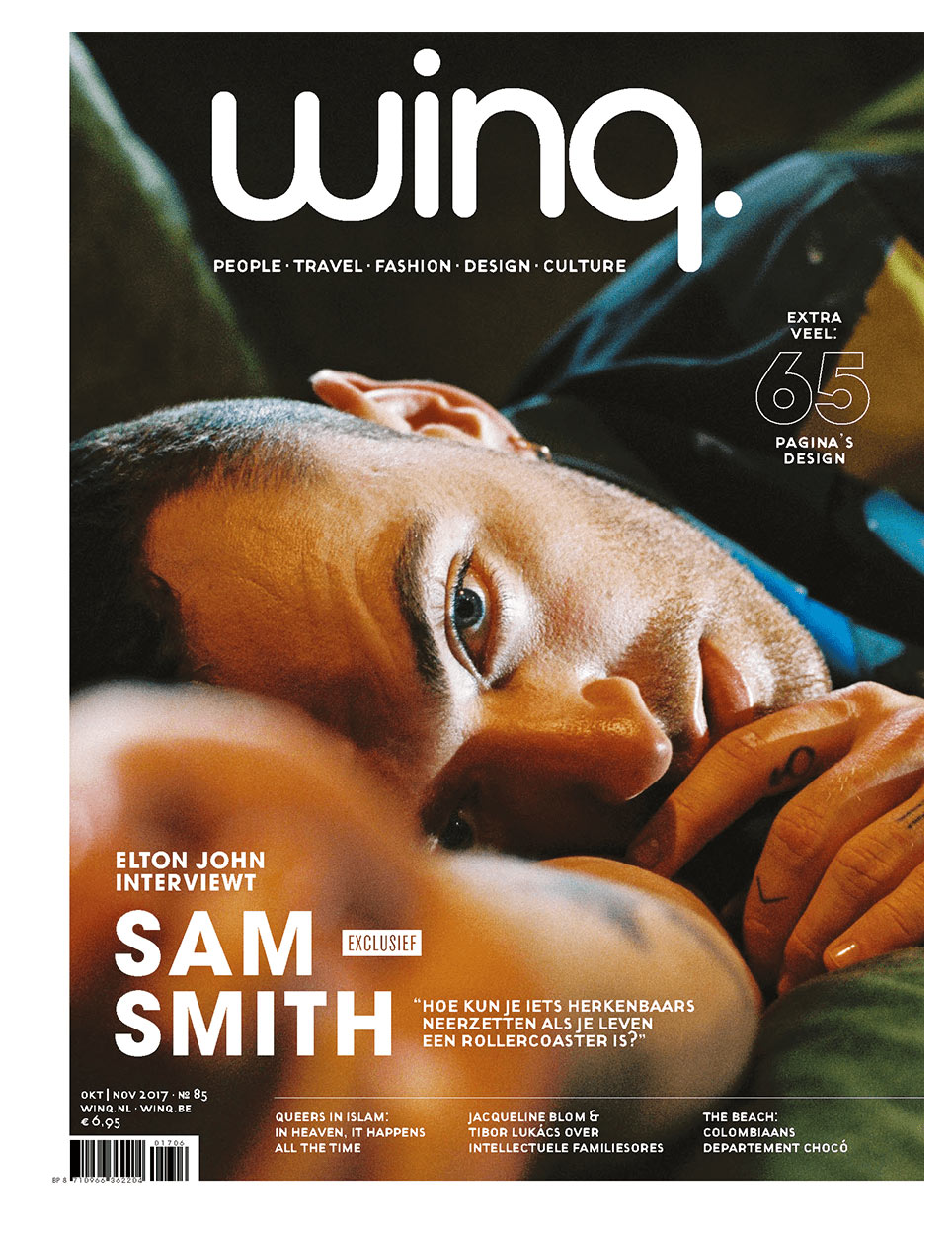